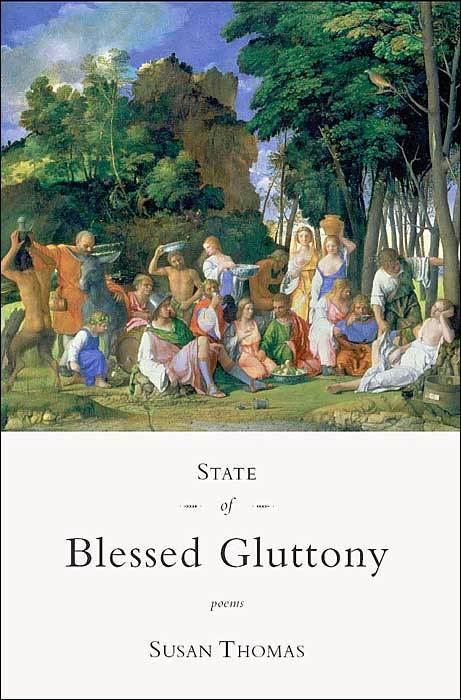 State Of Blessed Gluttony is a collection of poems that showcase award-winning poet Susan Thomas' remarkable vision and talent. With subject matters ranging the gamut from fairy tale to dire murder, madness, sumptuous repast, textured history and much more, State Of Blessed Gluttony invites the reader to devour each new free-verse contribution with a fresh appreciation for a wry spin put on seemingly commonplace occurrences. Snow White in Exile: Mother, I dream of dragonflies / and insect wings, the furry undersides / of bats. I dream of poison figs / and silver spiders. I dream of you / in your tower, stirring potions / to preserve your famous beauty. / The little men don't know / that every time I let you in / it's not because you trick me, / but that I hope you'll take me home.

Poems from State of Blessed Gluttony:

Saturday Morning at the River Run

They're all here.
Everyone and everything
you want and don't want
to see: neighbors, enemies, drunks,
farmers, lawyers, toast,
scrambled eggs and coffee,
the plumber who ruined
our lives for a year, and
used up all our savings.
Who you're with is noted
blueberry apple pancakes
and who you're not with, too.
Last night's ad hoc couples
shuffle in half-dazed,
not sure of anything,
fresh fruit and yogurt
sprinkled with granola
some shy, some gloating.
I watch the tables,
casing the early bird scene
looking for an extra seat,
jalapeño beancakes
or someone who owes us a favor.
Lucky break! A scandal
distracts us from starvation.
country ham and gravy
The gorgeous boy
a friend once dreamed
she poked the eyes out of,
saunters in the door with
the girlfriend of his brother.
Everyone turns to look and
poached eggs with hollandaise
our place on line is noticed
by a woman who borrowed
my favorite book and never
gave it back. She waves us over,
eggs with grits and cheese sauce
enough cholesterol to share
catfish, homefries, bacon
with half a dozen people.
We dig in at once, letting
bygones wipe the plate clean
biscuits, sausage gravy
and she's with a new boyfriend,
sourdough French toast
not the father of the baby
she gave birth to last year,
vegetable fritatta with
a side of green tomatoes
or the husband she had
when I lent her the book,
cornbread with peppers
crawfish etouffé
or her lover on the side
whose collection of Kafka
she kept when he dumped her.
Oh yes, she says, so kind of me
Andouille sausage omelette
to let her have the book.
It's currently out of print
catfish jambalaya
and she passes me the bacon,
offers to lend it back as I
pass her the toast, absolve
her of all past sins, absolve
us all of everything in
this state of blessed gluttony.

Nobody talks about her,
even says her name.
She shows up at funerals
in a fancy shroud and
sits all by herself.
Twenty years ago she
stood on a Florida highway,
in bell-bottom jeans, brown hair
flying in the wind, her thumb
extended in stupid innocence.
Someone picked her up in his car,
left a dead girl in her place.

Here at her father’s funeral
she is frantic to be noticed.
Her mutilated body wanders
through the family groups.
She heaps her plate with lox
and whitefish, spills coffee
onto the mourners’ clothing.
Not even the rabbi speaks her name.
Me, she says, my name. Say it.
He chants the Kaddish and intones
her father’s name in Hebrew.
He invokes Almighty God, reminds
us we must trust Him in all things.

At the burial, flowers hide her tomb stone
next to her father’s grave—rank lilies,
gladiola, chrysanthemum.
After the widow turns to leave
some of the mourners come forward.
The daughter, an aunt whispers.
They part the withered petals,
touch the grave stone and trace
her name with their fingers,
the dates of her meager years.

Cousins huddle at the cemetery gate.
Like them, she would be middle-aged,
have children, husbands, jobs,
divorces, a thickening waist.
On their way home, they see
her on the highway, her t-shirt
and blue jeans in tatters.
She cups her hands around her mouth,
My name, she shouts, is Rona.

The disappearing sky has thrown blue all
over the uplands. The hills are blue, the fields,
even the cows and the trees behind them.
I can still pick out twigs and the frozen

apples clinging to their fingers. Deer float up
in the blue, not quite invisible, watching me watch
them eat the frozen apples while I pick at what’s left
of my dinner. I can still make out the food

on my plate, blue tomatoes, blue rice, blue onions.
Soon the stars will fling themselves into darkness.
Nothing ever stops. Time makes no difference.
It circles overhead, watching me. I swallow

my dinner and listen to the clatter of plants
and seasons. I stand at the window, envying
the stars for their chummy ways with each other,
for the brilliant lives they lead in the frozen

throat of the cosmos while I hold fast
the warm house, this room with chairs and books
and table holding food I planted last year in
the tipped bowl of garden under this window.